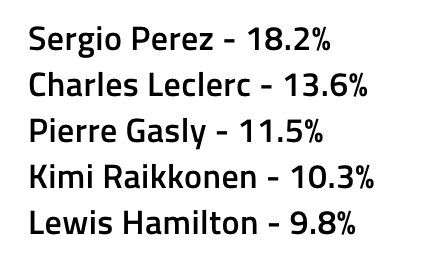 “I don’t think the start itself was very good – I lost a place – but then after that honestly I thought at one point ‘what are the others doing?’” he said – “I had a good first and then second lap, the speed was decent in the car most of the race, then we had a little bit of difficulties in the pit stop and in the end I lost 10th place to Vettel with old tyres. We got nothing out of it, so that’s a shame. We need more speed then everything will become a little bit easier.”

Before they sat down for the post-race news conference, Hamilton had been chatting with Verstappen about his landmark achievement.

"Lewis said he keeps pushing because he wants to set it very high so I have to work hard to get there,' Verstappen said. "It's amazing. He's pushing me to go until I'm 40 years old or something."

As Verstappen described his race, he was marvelling at veteran Alfa Romeo driver Kimi Raikkonen, who climbed up for 16th on the grid to sixth in the first two laps.

Hamilton, unaware of Raikkonen's performance until then as it had happened behind him, said: "Jeez. Shows you can still do it at 40."

"That's going to be so long," Verstappen said. "I don't even want to think about that."
Top