"Currently the convention centre is unsanitary and unsafe and we are running out of supplies for 15,000 to 25,000 people


People were raped in the Superdome. People were killed in there. We had multiple riots
New Orleans police officer 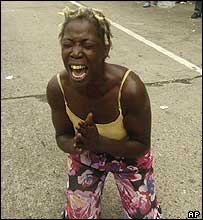 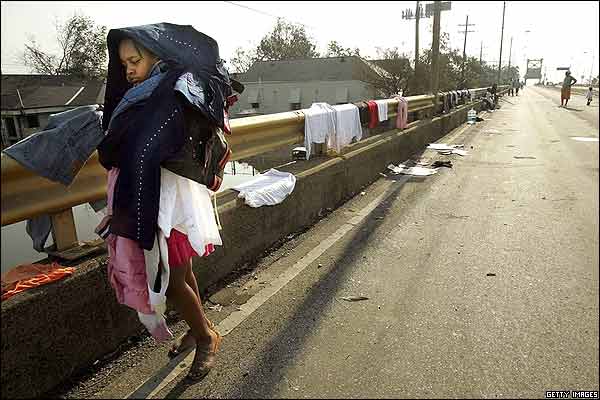 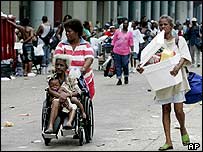 Najnovije vijesti:
explozije u NO!

The New Orleans riverfront has been hit by a series of massive blasts, and fires are raging in the area.

The cause and extent of damage are not yet clear. Police boats are at the scene of the explosions, which occurred at about 0430 (0930GMT).

The news came as extra troops were sent to quell lawlessness in the city, where thousands are stranded without food or water in Hurricane Katrina's aftermath.

Fire burns after explosions early Friday on the riverfront of New Orleans.


NEW YORK While the world, and the media, focus on major developments involving thousands of victims in New Orleans, individual horror stories -- and cries for help -- just get lost. The Times-Picayune in New Orleans, from the onset of the catastrophe, has managed to provide blogs, forums, and bulletin boards for readers to seek help or information. But this morning, the pleadings at one forum turned absolutely chilling.

Here are a few samples from past few hours on Thursday (updated here from the top).

Latest text message from inside the hospital: ''Water dropping. Gunshots. Not safe.''

Through text messages and intermittent cell phone calls I have learned that 1300 patients and staff remain trapped mere blocks from the SuperDome at the University Hospital on Gravier Street. My girlfriend of 15 years is a 3rd OB/GYN resident there.

No power, food or water for 48+ hours.
Many dead are reported in the hospital.
No helipad exists.
No word from the outside world on a rescue or a plan.
The stench is said to be unbearable.
*

My coworker's brother is one of seven doctors who have been left behind at Touro Hospital. His name is Vinroot, I'm sorry, I don't know the first name. He is in a panic--the doctors have barricaded themselves on the seventh floor because armed gunmen are outside threatening them and demanding access to the roof so they can be rescued first. He is desperate. Someone needs to help these people NOW!

*
There are still approximately over 300 Vietnamese people stranded in sewage water up to the necks in many areas gathered at the Mary Queen of VN Church. We've contacted USCG, Red Cross, news media but no help has come out to their way yet. As you all know, Versailles is so far on the eastern edge of New Orleans that by the time any helicopters come that way, they're
already filled with people and have to turn back towards the Superdome to drop people off.

The water is still rising in that area. Many of the people are growing weak and sick from lack of food and water plus the heat. Some of them feel like they probably won't make it for the next day. Please people!!! do what you can to get these people to safe land.

There are 7 people trapped in the Gallary Row apartments at 448 Julia Street (corner of Julia and Magazine). They were attacked by armed gang who hijacked their truck and drove it through a locked gate in the parking garage. They are unable to leave the building due to the heavy presence of large, well-organized armed looters. They expect the building to be attacked at any moment.

PLEASE HELP.
I just got word, I have friends trapped in a wharehouse located at 2716 Royal Street. There is reported gunfire outside.

*
I just talked to my neighbor who stayed behind at Camp and St. Mary. He walked along Jackson St and saw dead bodies everywhere from gun shots. After coming upon two dead girls, probably around 12-15 yr old, he had to get out. Where is the national guard? We need help.

*
Apparently armed thugs have surrounded the Tulane Univ Med Ctr (or hospital). One of the physicians trapped on the roof called his dad (a client of this NJ based law firm) to sound the alarm.

They are on the roof and need a chopper.

*
Does anyone know if Fats Domino is OK? I have been told his house is under water and he is missing.

Perhaps you could initiate a formal check by the boats in the 9th Ward?

*
DESPERATE SECURITY SITUATION IN RIVERBEND.
Spoke to my uncle this morning (Thurs) in Riverbend near Carrolton and St Charles. He and several (elderly) residents are holed up there and the security situation is getting desperate. Heat is extreme and there are roving gangs of looters with guns. The looters have also commandeered a backhoe and are ramming homes. My uncle and the others have no info about the evacuation. While Leake Avenue and River Road are dry, they are afraid to leave as they fear they will be shot, carjacked etc. This is a desperate plea for help as this is so far from downtown. We are trying to call everyone we can but of course the phone doesn't work. If someone official sees this, please send help.


*
Please notify the Coast Guard to search the buildings located on the campus of the University of New Orleans. Mr. Patrick Jolly is trapped in a building with other people and is surrounded by water. We lost contact with Mr. Jolly exactly two days ago. He is diabetic and has a group of people with him. His last conversation with his daughter was that he is surrounded by water due to the levee break and that a young girl was having an asthma attack. If possible, please notify the authorities to search each building on the campus for Mr. Jolly.

*
My mother is Cpl. Delores Paige she works with the New Orleans Sheriff Department. I spoke with her about an hour ago, according to her other deputies, along with the inmates, they were transported and trapped onto the Broad Bridge near the Times Picayune Building, it is also between Tulane and Washington Streets. They have been there for the last four days without any thing to eat or drink. Some officials came to get the inmates, but left the Deputies there standed I am very concerned for my mother because she is a diabetic and she says she has lost every thing. PLEASE, PLEASE, PLEASE, Help my mother and the others. She also states that there are people dying all around them. Please send help.

I am searching for my grandson his name is Brandon Childs. He is aproxamatly 4 ft. tall. He is 6 years old with blond hair and brown eyes. If anyone knows of his whereabouts please E-Mail [email protected].

*
I got a call from my sis-in-law, Vicki, just now. There are 3-4 adults with her, one with severe asthma and no medications. They tried to get out by boat yesterday, but then got shot at by looters. Vicki is calling around to see if anyone has any resources to help, and she was hoping someone might have a contact or an idea. If you would kindly forward this to anyone you know that is in or was in the National Guard, military, etc.. They are on the deck of a house waving a red flag between South Claiborne and Willow.

Thank you for your time and consideration.

My sister rode out storm in Biloxi. Her 18 yr old head trauma patient/daughter (Alyssa Taylor hit by drunk driver last year) is stuck with her with meds and tube foods running out quickly...Neighbors pooled their gas from mowers to get them out to no avail. They are urgently in need as are many others who cannot communicate out and are NOT receiving aid! My nephew left Georgia with Army with Chinook copters to rescue others in NOLA but he cannot divert to rescue his aunt and cousin...The after-dramas are worse than the storm and help is not reaching in and no one can leave without fuel.

*
Throughout the days of listing to news stories reading articles on the web I have yet to here anyone mention anything about the students at Xavier University. There are at least 400 students trapped in the dormitory with no food or water. From my understanding the police officials did not check to see if there were people still on campus. This article is to inform anyone reading this that these people need help urgently. The girls are on the 5th floor and the boys on the 6th. There pliot is dire and should be attended to as soon as possible.

A sto je to bitno?
Top