You Die In The Game - You Die For Real 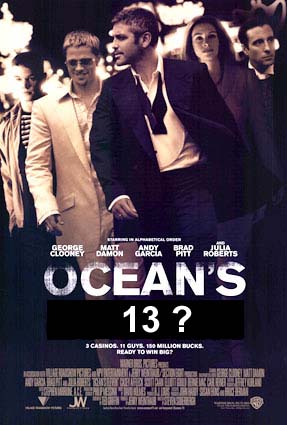 While in Paris on business, Harvard symbologist Robert Langdon (Tom Hanks) receives an urgent late-night phone call: the elderly curator of the Louvre has been murdered inside the museum. Near the body, police have found a baffling cipher. While working to solve the enigmatic riddle, Langdon is stunned to discover it leads to a trail of clues hidden in the works of Da Vinci -- clues visible for all to see -- yet ingeniously disguised by the painter.

Langdon joins forces with a gifted French cryptologist, Sophie Neveu, and learns the late curator was involved in the Priory of Sion -- an actual secret society whose members included Sir Isaac Newton, Botticelli, Victor Hugo, and Da Vinci, among others.

In a breathless race through Paris, London, and beyond, Langdon and Neveu match wits with a faceless powerbroker who seems to anticipate their every move. Unless Langdon and Neveu can decipher the labyrinthine puzzle in time, the Priory's ancient secret -- and an explosive historical truth -- will be lost forever.

Antelope poachers kidnap and execute a member of the Tibetan posse that was trying to capture them. (Note: Tibetan antelope population plummeted from 1 million to 70,000 in five years, the animals' woolen coats making them a prime target for rustlers.)In 1996, Ga Yu recruits the resourceful Ritai, a maverick who set up a private mountain patrol three years earlier, to accompany the posse on its mission. The drama unfolds over 17 days, with the journo witnessing the ruthlessness of the profiteers, and the patrol of volunteers combating their merciless adversaries and a frequently dangerous landscape.....
Top

A secret service agent is having an affair with the First Lady. When another agent assigned to the White House is murdered, the agent becomes a suspect in what may be a plot to assassinate the president.....

A thirteen-year-old Claire discovers a wounded and bleeding boy her age in her family’s garden shed. The boy is a young drug courier from Afghanistan, shot and wounded after serving his purpose as human packing material. Claire decides to keep the boy a secret. He slowly recovers under her care. They fall in love. When things get too difficult for them, they decide to flee. On the run from criminals they live their lives in the fast lane....
Top

Spoof franchise that will take on upcoming horror films as well as the superhero genre.....

A secret service agent is having an affair with the First Lady. When another agent assigned to the White House is murdered, the agent becomes a suspect in what may be a plot to assassinate the president.....

When a precocious, home schooled 13 year-old boy is sent to the local, rural school for the first time, it's going to be a whole new thing. For everyone.

EMERSON THORSEN (Aaron Webber), 13, lives with his parents KAYA (Rebecca Jenkins) and ROG (Robert Joy) in their eco-home in the wilds of Nova Scotia. He's just had his first wet dream, and completed writing and illustrating his first book, all 1000 pages of it. Meanwhile, the home schooled youth can barely add 2 + 2. His mother enrolls him in the local school. There, Emerson's English teacher is DON GRANT (Daniel MacIvor). At 42, the solitary Don has settled into a life of perpetual adolescence, paying regular visits to a park washroom for anonymous sex. In the classroom, Emerson stirs things up. Surprisingly, Don sees a bit of himself reflected in Emerson. Emerson, initially scornful of his teacher, quickly develops his first crush – on Don. The precociously confident boy, raised in a household of casual nudity and sexual openness, throws himself into this awakening of his heart with dangerous abandon. This is going to be a Whole New Thing. For everyone.
Top

ON A CLEAR DAY

Frank (Peter Mullan) is a hard-working 55 year-old, respected in his local community, who suddenly finds himself without a job. For the first time in his life, Frank is without direction. When his friend Danny (Billy Boyd) jokes that on a clear day he could swim to France, an idea is planted in Frank's mind. Concealing his plans from his loving wife Joan (Brenda Blethyn) Frank determines to put his life back together by attempting the ultimate test of endurance - to swim the English Channel. In so doing he cements a broken relationship with his grown up son.
Top