Armenian historian, former adviser to Armenian President Levon Ter-Petrosyan, professor at the University of Michigan, Zhirayr Liparitan, made a conceptual article in which he analyzes the reasons for Armenia's defeat in the Karabakh war. The author calls the reached agreement on Karabakh “the best that the Armenians could count on”, and also reflects on the future of Armenia and ways to overcome the crisis:

“We are going through a very difficult period in our history. From September 27 to November 10, our army waged a brutal war and suffered a tangible defeat, which is accompanied by colossal consequences. Before you can find a way out of the dark tunnel, in fact, the way out from there, you need to understand what happened and why. And we need to come to terms with what happened, accept it. Many of my colleagues have provided answers. This is my contribution to this polemic, ”the article says.

Armenia, Karabakh and the Armenian world have suffered a loss of historical proportions.
We lost a war that we had to avoid at all costs, a war that we could not win.

Another part of our people lost their ancestral homes and their collective life.

We have lost an entire generation of young men - one of our most precious values.

We have lost our human and financial capital invested in Karabakh over the years.

Our prime minister has lost the three goals that he set for himself to resolve the Karabakh conflict:

- return the "leadership" of Karabakh to the negotiating table,

- the possibility of ensuring the independence of Karabakh - even in the distant future.

We have lost our self-confidence, optimism and most of our achievements. We may have even lost our faith in democracy. We are a traumatized people who are completely unprepared to accept what happened and why.

We have lost another part of our independence and sovereignty.

The ceasefire agreement signed on November 10, 2020 and the subsequent statements by President Putin clearly showed that it is Armenia that is speaking on behalf of Karabakh: it is not even clear what voice Armenia itself will have in determining the course of further events. Despite this, in the eyes of all those concerned, Armenia is perceived as a party that has been and remains responsible in all issues regarding Karabakh.

After defeat, we are confused and we see confusion all around
On the one hand, we are filled with a sense of disbelief in what happened and the feeling that we have been betrayed, not being sure whether we will be able to collect the fragments of what seems to us to be a collapsed world. On the other hand, we are bombarded by mutual accusations, speeches and statements, the purpose of which is to find those responsible for our own sins, accompanied by explanations and excuses for our actions and words: an excuse for the inevitability of war, an excuse for why defeat is not defeat. And all this is in parallel with calls for revenge.

Adventurers, opportunists and superpatriots channel their entire arsenal into society - from the smallest mistake made in the war, to the wildest conspiracy theories, from accusations of misjudgment, cowardice, and desertion to treason worthy of the guillotine.

First of all, we have doubts about whether we are focusing on what is essential now. We no longer believe in our ability to raise the right questions, let alone whether we have the right answers to the following: how to evaluate the path that brought us here, and what to do in the future?

We still continue to wonder why we ended up here. How did we manage to get defeat from the mouth of victory? What mistakes were made?
Most of the attempts to answer the question of what mistakes have been made so far have focused on our mistakes and calculations during the war, and our diplomatic failures. Many blame the prime minister as well.

In all likelihood, during the preparation for war or during the conduct of war, much could have been done in different ways, but it is unlikely that we could get a result different from today. Experts, commissions and historians will analyze these failures for a long time to come and will probably not reach a consensus on what went wrong. None of these answers — individually or all taken together — are insufficient to understand our primary goal.

We have failed because instead of facing reality, our leaders have based their judgments on ideological, political, party and personal considerations for more than two decades. We were defeated because we refused to see the shifting balance of power and to accept that time was not working for us. We confused strategic thinking with the fact that we felt at ease.
As for Prime Minister Pashinyan, we must also take into account two factors:

a) His sincere but fundamentally inappropriate and dangerous belief that a democratic Armenia will provide international support for its position on the Karabakh issue, that the "West" is more advocating for democracy than for its own interests, that an appeal directed to the people of Azerbaijan and going beyond powers of President Aliyev, can bring to the fore a different Azerbaijani position, one that will be closer to the maximalist position of Armenians.

b) His lack of desire to act and negotiate, as befits a statesman: to negotiate the order of returning the occupied territories and peace, equivalent security guarantees for our people to live on their land.

For more than 20 years, the West, East, North and South have told us that (a) they do not recognize the "independence" of Karabakh and (b) consider the 7 regions adjacent to Karabakh that were under the control of the Armenian side occupied, and whatever the reasons for our control over them, we must return them. And all this time Azerbaijan told us that it would fight for them. For so long neglecting their statements, we still turned to the West with a request to help us preserve these 7 regions and recognize the "independence" of Karabakh. In the case when they began to lose in the war.

Our main problem is our way of thinking
(When I say "our", in this case I mean the leaders of our state and most of the political parties that have taken to the streets today). Our problem is how we perceived the Karabakh conflict, and how we formulated the issues affecting its solution: we began with a conclusion that corresponded to our dreams, then we voiced only those questions that confirmed our conclusions, and did not challenge our assumptions and logic.

Our problem lies in our political culture, which relies on dreams rather than hard facts: the way we strategize, the way we can easily set aside the words and actions of the outside world and our opponents if they distort our prejudices and predetermined beliefs. We adjust the political strategy according to our desires, according to what is more pleasant for us, and do not take into account those simple facts that together make up the reality around us.

Our problem is that we allow our reason to be clouded by the highest, loftiest and most perfect solutions, our illusions. Our problem is that we persistently overestimate our capabilities so as not to question our strategy and ruin our dreams. We considered our strategy "not an inch of the earth" correct, as our cause was right. And we believed that we could subjugate the will of the enemy and the international community, make them think and feel the way we do. We believed that our dreams were so lofty that they could replace strategic thinking, if only to turn them into a political program and declare them to the world. We didn’t want to violate our comfortable position and feel like patriots.

Since the enemy did not want to give us what we dream of, we decided that the enemy is not flexible, that he is not ready for negotiations. Thus, we said that it is impossible to avoid war, that this is an acceptable option dictated by the situation, and this is not our fault.

As a result, this logic came to the inevitable conclusion: we will fight and, of course, we will win and force the enemy to accept our logic, our conditions, our decision. And to hell with any real assessment of the balance of power. It is better to try your luck in war, not in peace. We argued that the choice in favor of peace was the decision of the defeatists: there was no need to invest everything we had in negotiations, there was no need to sacrifice the purity of our dreams.

We even had the necessary foundation to accommodate the inevitable loss of young lives. After all, isn't our story full of heroes and sufferers? We are blessed with the memory of the battle of Vardanants? A battle in which more than a thousand soldiers died ... Didn't our history and church tell us that the death of young guys is acceptable, even if the dedication of thousands does not bring victory?

Peace was at best viewed as a choice that did not need to be judged higher than war: it could be accepted or rejected. And our rhetoric was consistent with this arrogance and, I may add, this dangerously imprudent judgment.

Both decisions - negotiated or war - were risky. Each had its own risks. But as a result of a failed world, at worst, we would be where we are now, perhaps even in a better position. And in case of war, the ceasefire agreement signed on November 10 is the best we could hope for.

What we have today in the market of strategic thinking regarding the opposition that wants to change the government and power is extremely dangerous.
We see a continuation of refusal to accept real questions and simple answers to them, and we repeat the same slogans, clinging to the same illusions. We offer the wrong solution for the wrong diagnosis.

By insisting on continuing a failed and costly strategy, the government is trying to convince us - and perhaps itself - that the way it thought about the issue was the only way, and that what was done had no alternative. The Prime Minister admitted minor mistakes that mask the real failures of his thinking and strategy.

The parties opposing him on the street did not do what Pashinyan did. They have yet to realize that they have made a mistake - minor or major. This opposition consists of parties that represent the backbone of a vicious strategy and problematic thinking: a group that never announced a path that would inevitably lead to war, an opposition that applauded when Pashinyan rejected Lavrov's proposed mutual concessions - before the war and a few days after its beginning. An option that could provide us with a better position than the current one, and without all these losses. We must raise the question of what task these people were solving.

Some even propose to invalidate the agreement, force the other signatories to change it, or even renew the war in order to take revenge. Was it necessary for President Putin to warn us that any such step would amount to suicide?

A possible consequence of the continuation of the thinking that led us to this historic loss would be a renewed war that could result in the loss of what is still ours.

The time has come to change the direction of the movement that points us to our recent past, if we want to develop a program for the future, a program that will stand the test of time and common sense.
Top 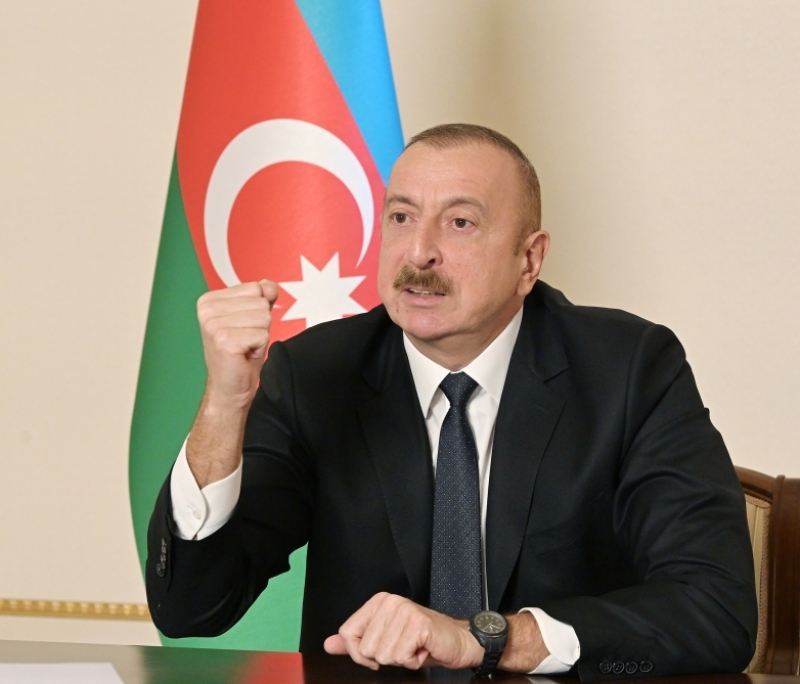