Do you think that Marquez helped out Lorenzo at Phillip Island?
“It is indeed true that Marquez did not play with both of us: he only played with me! It is important that he knows that I know! Now let's see what happens, but I am quite concerned because to have to fight with Lorenzo is one thing, but if you have to beat Marquez as well, everything becomes much more difficult, to be honest - the case is that he isn’t playing fair (something that a professional rider has to do in these situations). Especially because Marquez could be very competitive in the last two races.”

“For me it was a big disappointment, I was upset, it was from a few races ago that I knew, but I did not expect him to do something so obvious. I feel disappointment, regret and worry, because surely he will try to do it here and also in Valencia.”

So why did he eventually also overtake Lorenzo?
“In the race I noticed it, but I did not understand; Marquez was a step above everyone, but instead of trying to try to battle Lorenzo, he stayed with me to fight with Iannone and others. He knew that I was losing out to the Ducati on the straight. And so every time I tried to pass him, he re-overtook me (super-aggressive, but thats the way it is). But then he slowed to create a gap to Jorge. His bad luck was that on Sunday Jorge was not so strong, because otherwise it would have been over already. Instead, he always kept Jorge in check, knowing that he could catch him within 3 laps, and then tried to slow me and Iannone, perhaps trying to put other riders between me and Lorenzo. And in the end, that's what he did. It is clearly quite worrying, but it doesn't worry me too much”

Why do you think he did this?
“Because he would prefer Lorenzo to win. He is angry at me for a personal matter. Although he never said it, he thinks that in Argentina I made him crash; and then at Assen he is still thinking about the last chicane, in his head he feels he should have won that race. Since then he has been angry and thinking like a child: I do not win, but you do not win either. At this point, the lesser evil is for him is for Lorenzo to win.”

Is it something that motivates you or makes you angry?
"Let's see. Because if he's faster yet slows down to get involved in the battles further back, it could become difficult. Because he has nothing to lose, but I do. I have to be wary. I'm sorry and I'm quite angry. I did not expect that Marquez was an obstacle for this Championship, I thought I was only fighting against Jorge, as it should be.”

Because he used to idolise you, did you think this wouldn't happen?
"Watch out, here we must make a clarification: did he really idolise me? Did he really have my poster at home? I'm not so sure. I'd like to go back in time and see. It will also be a question of character, he is competing with me: I want to win as many World Championships as I can. If I win another title, then he knows that he will have to win one more to overtake me. If instead Jorge wins, then they have more or less the same.”

Was it better with Biaggi, because he at least made his feelings clear?
"It's true you are right. In the long run, I prefer more his behaviour. We were obnoxious to each other, but at least it was clear and honest. But I do not have his phone number.”

Did this all begin in Laguna Seca?
“There have been lots of moments, at Laguna Seca he wanted to do what I had done to Stoner five years before, when he could easily have passed three corners later. It was the first signal. And I said so, but I did not want to believe it. To think evil, it takes forever.”

Wanting to make a literary comparison, since we are in Malaysia, do you feel like Sandokan fighting Yanez?
"I would not know. I do not think that there is this difference between me and Lorenzo. I think we're both brave, each in his own way, and also a bit cunning." 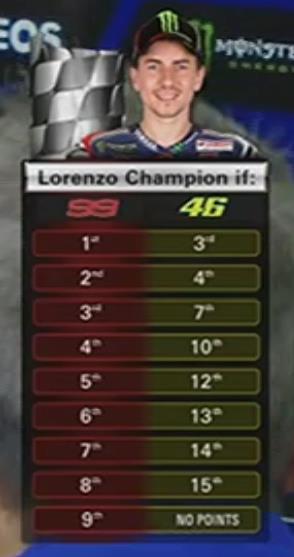