ISIS was formed in April 2013 and grew out of al-Qaeda in Iraq (AQI). It has since been disavowed by al-Qaeda, but become one of the main jihadist groups fighting government forces in Syria and is making military gains in Iraq.

The final "S" in the acronym ISIS stems from the Arabic word "al-Sham". This can mean the Levant, Syria or even Damascus but in the context of the global jihad it refers to the Levant.

Its precise size is unclear but it is thought to include thousands of fighters, including many foreign jihadists. Correspondents say it appears to be surpassing al-Qaeda as the world's most dangerous jihadist group.

The organisation is led by Abu Bakr al-Baghdadi. Little is known about him, but it is believed he was born in Samarra, north of Baghdad, in 1971 and joined the insurgency that erupted in Iraq soon after the 2003 US-led invasion.

Baghdadi is regarded as a battlefield commander and tactician, which analysts say makes ISIS more attractive to young jihadists than al-Qaeda, which is led by Ayman al-Zawahiri, an Islamic theologian.

Prof Peter Neumann of King's College London estimates that about 80% of Western fighters in Syria have joined the group.

ISIS claims to have fighters from the UK, France, Germany and other European countries, as well as the US, the Arab world and the Caucasus.

Unlike other rebel groups in Syria, ISIS is seen to be working towards an Islamic emirate that straddles Syria and Iraq.

The group has seen considerable military success. In March 2013, it took over the Syrian city of Raqqa - the first provincial capital to fall under rebel control.

In January 2014, it capitalised on growing tension between Iraq's Sunni minority and Shia-led government by taking control of the predominantly Sunni city of Fallujah, in the western province of Anbar.

It also seized large sections of the provincial capital, Ramadi, and has a presence in a number of towns near the Turkish and Syrian borders.

The group has gained a reputation for brutal rule in the areas that it controls.

However, it was its conquest of Mosul in June that sent shockwaves around the world.

The US said the fall of Iraq's second city to ISIS posed a threat to the entire region.

Inter-rebel tension
The group has been operating independently of other jihadist groups in Syria such as the al-Nusra Front, the official al-Qaeda affiliate in the country, and has had a tense relationship with other rebels.

Zawahiri has urged ISIS to focus on Iraq and leave Syria to al-Nusra, but Baghdadi and his fighters openly defied the al-Qaeda chief.

Hostility to ISIS grew steadily in Syria as regularly attacked fellow rebels and abused civilian supporters of the Syrian opposition.

In January 2014, rebels from both Western-backed and Islamist groups launched an offensive against ISIS, seeking to drive its predominantly foreign fighters out of Syria.

Thousands of people are reported to have been killed in the infighting. 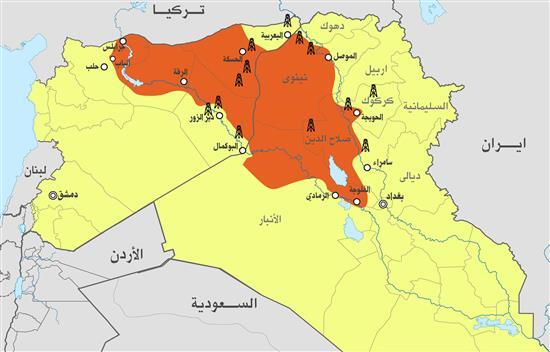 BAGHDAD – Militants took control of the Iraqi city of Tikrit and freed hundreds of prisoners on Wednesday, police said, the second provincial capital to fall in two days.

"All of Tikrit is in the hands of the militants," a police colonel said of the Salaheddin provincial capital, which lies roughly half way between Baghdad and Iraq's second city Mosul which fell on Tuesday.