Are some models so thin they should be kept off the runway?

The world's first ban on overly thin models at Madrid's Fashion Week has caused outrage among modeling agencies and raised the prospect of restrictions at other Fashion Week venues across the world. According to this article, the show was restricted to runway models with a body mass index (BMI) higher than 18, which means a 6'0" tall model would have to weigh no less than about 135 pounds to be considered. Madrid’s Fashion Week has turned away underweight models after protests that girls and young women were trying to copy their rail-thin looks and developing eating disorders. Organizers of the Madrid show say they want to project an image of beauty and health, rather than a waif-like, or heroin chic look. Britain's culture minister and Milan's mayor have already called for similar rules in London and Milan.

Faith-Based Sizing
Designers are introducing new supertiny sizes. Are American women getting smaller, or is the fashion industry messing with our minds?

Oct. 18, 2006 - If you remember the days before there was a size zero, you might have to brace yourself for some unsettling fashion news: there is now a size smaller than nil. A negative size if you will. Next fall, designer Nicole Miller will introduce something tentatively called the "subzero" for women with 23&frac12;-inch waists and 35-inch hips. And this spring, Banana Republic began offering an equally tiny "00" on its Web site.

If you're having trouble picturing a minus-size woman, think of the waifish Spice Girl turned soccer wife Victoria Beckham who is reputed to be small enough to fit into a subzero. One newspaper compared her waist to the circumference of a soccer ball, but it might be even tinier than that—23 1/2 inches is closer to the size of the smaller soccer balls recommended for kids.

But mini-celebs aside, does the debut of the less-than-zeros mean that a sliver of America is shrinking while the rest of our obesity-challenged country grows in girth and clothing size? Yes and no. American women are definitely getting bigger as a group. The average woman is about 155 pounds and 5 foot 4 according to SizeUSA, a 2003 survey by the industry research group [TC]&sup2;. That's about 20 pounds heavier than the average woman of 40 years ago.

But don't assume that the contemporary woman is wearing a bigger size than her grandmother might have. "According to standard size measurements, that average 155 pound woman should be wearing a size 16, but thanks to vanity-sizing, she's probably buying a size 10 or 12," says Jim Lovejoy, the industry director for the SizeUSA survey. "Most companies aren't using the standard ASTM [American Society for Testing and Materials] sizes any more. Sizes have been creeping up a half inch at a time so that women can fit into smaller sizes and feel good about it."

Think of vanity-sizing as self-delusion on a mass scale. Anyone over the age of 40 knows that something isn't quite right if she can wear a smaller size now than she wore 20 years and 10 pounds ago. Yet many of us slip gratefully into a size 6 pair of Old Navy jeans even though we're pretty sure we wouldn't be able to squeeze into our size 10 Calvin Kleins from circa 1980. Call it faith-based sizing. We want to believe—hell, we really do believe—we're a size 6 or 8 because the label says so even when the scale disagrees.

The move away from standard sizing has its disadvantages—especially for small-boned women who might be a standard size 4 but who now have to go into the negative numbers to get something that fits. Nicole Miller's spokesperson Allison Hodge says the designer created the subzero for those naturally petite women and not for 5-foot-10 14-year-old models who've dieted themselves down to a dangerously low height-to-weight ratio. "We first introduced a size 0 (25&frac12;-inch waist) about 15 years ago because we had a strong presence in California and a lot of our Asian customers were asking for them," says Hodge. This year, the company decided to go smaller at the request of buyers who reported that women coming in for a size 0 were having to take them in.

While it's hard to imagine that anyone wants to be called "minus" or "sub" anything, there is some concern that the less-than-zero sizes will be a new status symbol for girls with eating disorders. Last month, rail-thin models were banned from a Madrid runway show for being underweight size zeros. But despite the banishing of bony models and the disparaging headlines over photos of shrinking celebs like Kate Bosworth, it's hard to shake the impression that razor thin is still very much in vogue. Or, as Stanley Tucci's character famously said in "The Devil Wears Prada," size 6 is the new 14.

For women of any size, this morphing measurement creep means there is no simple answer to the question: what size are you? Many of us respond: "Well, it depends...." because sizes vary wildly between brands as well as decades. A Land's End size 10 has a 30-to-31-inch waist, while a Diane von Furstenberg size 10 has a 29-inch waist. And Neiman Marcus's Web site alone has a half dozen size charts sorted by designer and other mysterious categories like "modern." (Note to male readers: If this is all getting too complicated, just ask any female friend or relative to explain.)

On top of that, there are the variations on a single size within a brand. You can get your Gap size 8 jeans in four very different cuts from boyish to a curvy style that comes very close to the next size up. Chicos, a chain for older women, has ditched the pretense of regular sizing altogether opting for a 0-4 range where a 2 might be more like a 10 at another store, or something like that—who really knows? Then there are the humiliatingly small European sizes ranging from 34 to 44—many of which are unlikely to fit an average American woman.

Part of the problem is that manufacturers are struggling to keep up with changing demographics and body types in the United States. The population of Asians and Hispanics continues to grow even as aging boomers have new fashion needs. "We get bigger as we get older and ethnic groups have different proportions," says Lovejoy. "Developers are trying to target their product to a particular market so the fits are going to be very different from brand to brand."

While designers may intend to offer more choice for consumers, the end result is often utter confusion. Looking for a simple skirt and top can be incredibly frustrating for those not patient enough to try on 10 different sizes just to find the perfect fit. No wonder so few women are running Fortune 500 companies—who has time? Men, on the other hand, can usually get a decent fit in a shirt simply by having accurate neck and sleeve measurements.

Pam Danziger, author of "Let Them Eat Cake: Marketing Luxury to the Masses as Well as the Classes" (Dearborn Trade), advocates a return to reality-based sizing using standard measurements. But even she acknowledges that getting those of us happily wearing single-digit sizes to move back to double digits is a tough sell—woe to the manufacturer who decides to tell a size 16 woman that she now has to buy a 20. "I occasionally sew my own clothes using Vogue patterns whose measurements haven't changed in decades," she says. "Of course I hate having to buy a size 14 pattern to fit my size 6 off-the-rack body. But, if we could just get over the shock of actually being a 14, maybe we could get on with our lives."

Some companies, like Gap Inc., are trying to appeal to both the tiniest and the largest customers—who together make up a generous portion of the market. (About 12.5 percent of the women in the SizeUSA survey were 200 pounds or more while 14 percent were 115 pounds or less.) Gap introduced a size 0 in the 1990s and created a plus-size line for their Old Navy stores. Today they are using bigger-fit models—size 10 versus a size 8—for their newest brand, Forth & Towne, which is geared to boomer women. But whatever our girth, Danziger says that we'd be better off paying more attention to our BMI number (ratio of height to weight) than the numbers on our labels. "I don't think some of those Hollywood size zeros are healthy," she says. "But putting political correctness aside, neither are the women who are 200 pounds ... Obesity isn't a fashion issue, it's a national health issue."

Women who fall somewhere in between superskinny and zaftig should take heart. If vanity downsizing continues at this pace, many of us could be wearing a subzero by 2020. Of course, we'll have to rip out the labels of those size 10s from 2006.
Top 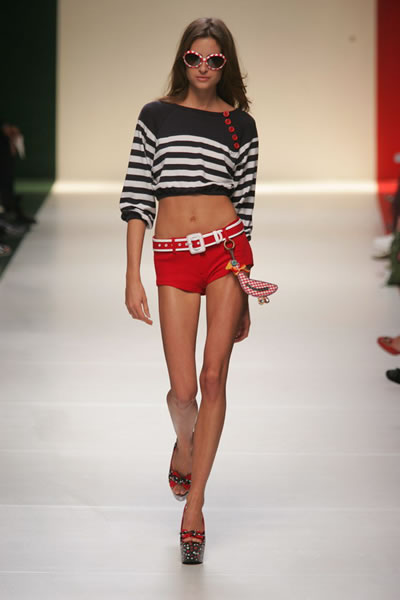