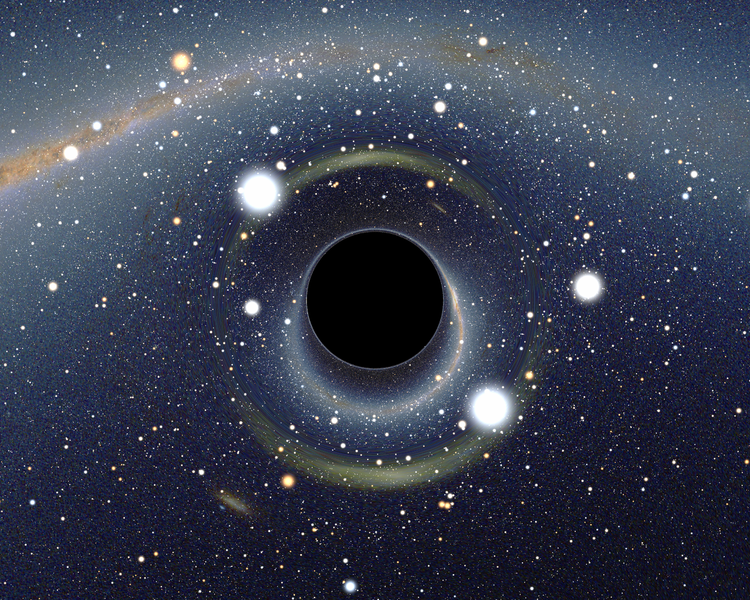 The BLACK HOLE, area in the space, arisen as a result of a full gravitational collapse of substance in which the gravitational attraction so is great, that neither substance, nor light, other data carriers cannot leave it. Therefore the internal part of a black hole causally is not connected to other universe; physical processes occuring inside a black hole cannot influence processes outside of it. The black hole is surrounded with a surface with property of the unidirectional membrane: the substance and radiation freely falls through it in a black hole, but therefrom nothing can leave. This surface name &laquo; horizon of events &raquo;. As till now there are only indirect indications on existence of black holes on distances in thousand light years from the Earth, our further statement is based mainly on theoretical results.

The black holes predicted by the common theory of a relativity (the theory of the gravitation suggested by Einstein in 1915) and other, more modern theories of gravitation, have been mathematically proved by R.Oppengejmer and H.Snajder in 1939. But properties of space and time in a vicinity of these objects appeared so unusual, that astronomers and physics within 25 years are not in earnest to them. However astronomical opening in the middle of 1960th years have forced to look at black holes as on a possible physical reality. Their opening and studying can essentially change our representations about space and time.

While in bowels of a star there are thermonuclear reactions, they maintain high temperature and pressure, interfering with compression of a star under action of own gravitation. However in due course nuclear fuel is exhausted, and the star starts to be compressed. Calculations show, that if the weight of a star does not surpass three weights of the Sun it will win &laquo; fight with gravitation &raquo;: its gravitational collapse will be stopped by pressure of "degraded" substance, and the star will for ever turn in the white dwarf or a neutron star. But if the weight of a star more than three solar nothing can already stop its catastrophic collapse and it quickly will leave under horizon of events, becoming a black hole. At a spherical black hole of weight M the horizon of events forms sphere with a circle on equator in 2pi time of the greater of " gravitational radius &raquo; black hole RG = 2GM/c2, where c - speed of light, and G - a constant of gravitation. The black hole with 3 solar weight has gravitational radius of 8,8 km.

If the astronomer will observe a star at the moment of its transformation into a black hole all over again he will see how a star all is fastly and fastly compressed, but in process of approach of its surface gravitational radius compression will start to be slowed down, will not stop yet absolutely. Thus light coming from a star will weaken and redden, will not die out yet absolutely. It occurs because in struggle against a huge gravity light loses energy and it is required to it to more and more time to reach the observer. When the surface of a star will reach the gravitational radius, light which has left it will need infinite time to reach the observer (and thus photons completely will lose the energy). Hence, the astronomer never will wait this moment and the more so will not see that occurs to a star under horizon of events. But theoretically this process to investigate it is possible...

A (simulated) Black Hole of ten solar masses as seen from a distance of 600 km with the Milky Way in the background (horizontal camera opening angle: 90°). The blurred ring is due to objects whose light must travel close enough to the black hole to suffer gravitational lensing distortion before being observed.

...the substance and radiation freely falls through it in a black hole, but therefrom nothing can leave.

May you forever burn in hell bwehehehehe This is an artist’s impression of a unique type of exoplanet discovered with the Hubble Space Telescope. The planet is so close it to its star that it completes an orbit in 10.5 hours. The planet is only 750,000 miles from the star, or 1/130th the distance between Earth and the Sun.
The Jupiter-sized planet orbits an unnamed red dwarf star that lies in the direction of the Galactic Centre; the exact stellar distance is unknown. Hubble detected the planet in a survey that identified 16 Jupiter-sized planets in short-period, edge-on orbits (as viewed from Earth) that pass in front of their parent stars. Hubble could not see the planets, but measured the dimming of starlight as the planets passed in front of their stars.
This illustration presents a purely speculative view of what such a "hot Jupiter" might look like. It could have a powerful magnetic field that traps charged particles from the star. These particles create glowing auroral rings around the planet’s magnetic poles. A powerful magnetic flux tube links the planet and star. This enhances stellar activity and triggers powerful flares. A powerful stellar wind creates a bow shock around the planet. The planet’s atmosphere seethes at 1,650 degrees Celsius.

Credits: NASA, ESA and A. Schaller (for STScI)

Massive stars die in the biggest explosions since the big bang. Now scientists are deciphering the stories of these doomed suns.

Ever since he was a teenager, Stan Woosley has had a love for chemical elements and a fondness for blowing things up. Growing up in the late 1950s in Texas, "I did everything you could do with potassium nitrate, perchlorate, and permanganate, mixed with a lot of other things," he says. "If you mixed potassium nitrate with sulfur and charcoal, you got gunpowder. If you mixed it with sugar, you got a lot of smoke and a nice pink fire." He tested his explosive concoctions on a Fort Worth golf course: "I screwed the jar down tight and ran like hell."

Woosley, now an astronomer at the University of California at Santa Cruz, has graduated to bigger explosions—much bigger. Woosley studies some of the most powerful explosions since the birth of the universe: supernovas, the violent deaths of stars.

The universe twinkles with these cataclysms. They happen every second or so, usually in some unimaginably remote galaxy, blazing as bright as hundreds of billions of stars and creating a fireball that expands and cools for months.

We're lucky that they rarely strike close to home. The last supernova in our own galaxy exploded in 1604, rivaling Jupiter's brightness in the night sky and deeply impressing Johannes Kepler, the pioneering astronomer. A nearby supernova—within a few light-years—would bathe the Earth in lethal radiation.
........ 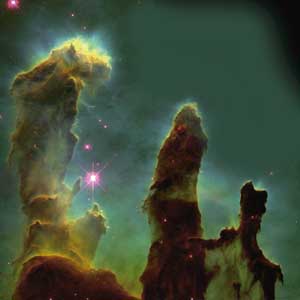 March 15, 2007
Mars's southern polar ice cap contains enough water to cover the entire planet approximately 36 feet (11 meters) deep if melted, according to a new radar study.
It's the most precise calculation yet for the thickness of the red planet's ice, according to the international team of researchers responsible for the discovery.

Using an ice-penetrating radar to map the south pole's underlying terrain, the scientists calculated that the ice is up to 2.2 miles (3,500 meters) thick in places, said the study's leader, Jeffrey Plaut of NASA's Jet Propulsion Laboratory in Pasadena, California.
The radar, from the Mars Express orbiter, also revealed the surprising purity of the ice, Plaut added.
On average, the ice cap contained less than 10 percent dust, he said. The study will appear in tomorrow's issue of the journal Science.

The polar ice cap may also contain some frozen carbon dioxide, or dry ice, Plaut said. But there can't be much of it, because such a thick layer of dry ice would start to ooze sideways under its own weight. (Related photo: "Martian Geysers Spew Ice, Dust" [August 21, 2006].)
"Only water ice could support itself that way," Plaut said.
The research team also found a series of depressions buried beneath the ice only 180 miles (300 kilometers) from the pole.
These are probably impact craters, Plaut said, though they might also be features caused by erosion, similar to ones found elsewhere on Mars. (Related story: "Mars Has Liquid Water, New Photos Suggest" [December 6, 2006].)
"We don't completely understand them, because we have only a vague image of them," Plaut said.
But, significantly, the team didn't find a large depression under the ice.
On Earth such depressions occur beneath ice caps because the weight of the ice pushes the underlying crust down into the planet's mantle, like a sleeper's head depressing a pillow.

"On Mars this is not taking place," Plaut said. "This tells us that the upper crust and mantle of Mars is very stiff—much stiffer than the Earth."

The amount of water in the ice cap is more than most scientists had expected, but not by a huge amount.
And even when combined with the amount believed to reside at the planet's north pole, it's still only a small fraction of the water that scientists believe once existed on the red planet.
There are only two places where the rest can be: buried underground or lost to space through the thin Martian atmosphere. (Related: "Mars's Water Could Be Below Surface, Experts Say" [January 25, 2007].)

"Those are still avenues that are being investigated," Plaut said.

Ray Arvidson, a professor at Washington University in St. Louis, Missouri, and a member of the Mars rover team, says that the new find is simply another part of scientists' expanding efforts to trace the missing Martian water.
Other orbiting instruments are looking for ice in the Martian soil, while the Mars rovers and additional instruments are mapping out deposits of water-altered minerals on the Martian surface.
Years ago, Arvidson said, Mars researchers could only speculate about water based on ancient river channels and canyons. But now it's possible to look for it directly.
"The more we look, the more water we're seeing," Arvidson said. "It's really exciting."

Return to “Nauka i edukacija”