An Israeli academic who argues that Israel should confess to a deliberate campaign to expel nearly 800,000 Palestinians in 1948 is courting controversy at home
SO IS it to be 1967 or 1948? For watchers of the Middle East this question is shorthand for two different ways to think about the origins of, and solutions to, the long conflict between Israel and the Arabs of Palestine. In the eyes of the 1967 crowd, Israel was entitled to the borders it had before its abrupt expansion in the six-day war of that year. To make peace, the trick is therefore to create circumstances in which Israel will give up most or all of that land and allow an independent Palestinian state to arise in the West Bank and Gaza. That, as generations of failed peacemakers have discovered, is quite a tall order.

For the 1948 crowd, however, this way of thinking about the conflict is a mistake. They argue that peace is impossible unless Israel admits to and atones for the crime they say it committed nearly 60 years ago, in its independence war of 1948. That crime, they say, was deliberately to expel most of the Arabs of Palestine, close to 800,000 people, in order to be sure of having a Jewish majority for the Jewish state. Unless Israel somehow makes amends for this earlier catastrophe, which the Arabs call the nakba, peace is an impossibility.


Ilan Pappe, a political scientist at the University of Haifa, is one of the purest Israeli exponents of the 1948 view. He knows how provocative it is to choose the phrase “ethnic cleansing” for the title of his latest book. But ethnic cleansing, he insists, is precisely what occurred in the first Arab-Israeli war. It was, he says, a long-premeditated crime, implemented ruthlessly and then systematically denied. In 1948 the Zionists did not happen to wage a war that tragically but inevitably led to the expulsion of parts of the indigenous population. The ethnic cleansing of all of Palestine, he maintains, was the main goal all along.

Inside Israel, the historiography of 1948 has been in ferment for more than 20 years. Israel and its admirers once clung to a simple collective view about the circumstances of the state's birth. In a Solomonic judgment, the United Nations voted to divide the contested land into a Jewish state and an Arab state. The Jews accepted the plan, but the Arabs tried to strangle the Jewish state at birth. In the course of the war that followed, the Jews overcame vast odds, guaranteeing their survival and expanding the territory allotted to them under the original plan. In the course of the fighting, most of the Arab population fled.

The last bit of this over-simple narrative has by now been comprehensively debunked. In 1988 Benny Morris, an Israeli historian, published “The Birth of the Palestinian Refugee Problem, 1947-1949”, challenging the view that most of the Arabs fled of their own accord, in panic or at the behest of the Arab states. In many towns and villages they were put to flight deliberately. Mr Morris said that there was no master plan to evict all the Arabs: many expulsions took place in the heat of battle and the fog of war. But he also argued that the idea of a population transfer had been carefully considered by David Ben-Gurion and the other Zionist leaders, and hovered behind their actions and deliberations.

Mr Morris and other “new historians” in Israel unleashed fierce argument. Other scholars accused Mr Morris of traducing Ben-Gurion through selective quotation. In a new version of “The Birth” in 2004, Mr Morris offered even more evidence of the extent to which the Zionist leadership hankered after a population transfer, and the alacrity with which they exploited the events of 1948 to bring one about. (Mr Morris also said, in an interview that stunned his supporters, that Israel was justified in uprooting the Palestinian “fifth column” once the Arabs had attacked the infant state, and that the number executed or massacred—some 800, on his reckoning—was “peanuts” compared with, say, the massacres in Bosnia in the 1990s.)

Mr Pappe, however, goes a good deal further than Mr Morris. He insists that there was indeed a master plan. On March 10th 1948, he asserts, 11 men met at the “red house”, the Tel Aviv headquarters of Israel's pre-state army, the Haganah, to put the final touches to Plan Dalet, “a plan for the ethnic cleansing of Palestine”. That evening, military orders were sent to units on the ground to prepare for the expulsion of the Palestinians. Mr Pappe calls this group of men the “consultancy”, an ad hoc cabal of political and military leaders dominated by Ben-Gurion. And population transfer did not just “hover” in the background of their thinking, he says. It was central from the start.

Still in a fog
You might suppose that after 60-odd years the story of 1948 would by now have been laid bare. Historians have access, on the Israeli side at least, to military archives, political minutes and personal diaries.

It is not, alas, so simple. The consultancy rarely kept minutes. Ben-Gurion was a prodigious diarist, but selective in what he recorded. Mr Pappe admits that he does not in fact know what Ben-Gurion said at the supposedly fateful “red house” meeting on March 10th. As for Plan Dalet, this is no new discovery by Mr Pappe. The plan has been public for decades and does not read unambiguously like a master plan for wholesale ethnic cleansing. The aim was to crush the Palestinian militias before the Haganah had to face the invading Arab armies. It gave commanders discretion to occupy or destroy and expel hostile villages or potentially hostile villages; some destroyed swathes of villages and a few did not. And Mr Pappe's detractors will ask why he ignores the orders sent out by the chief of staff of the Haganah, Israel Galili, on March 24th, reminding commanders of the policy to protect the “full rights, needs, and freedom of the Arabs in the Hebrew state without discrimination”.

Thanks to such inconsistencies, the history of 1948 will remain contentious. And like much of the “new history”, this book has the defect of treating the Palestinians only as victims, not as actors in their own right. But how much really turns on this debate among historians? Mr Pappe says that Zionism needs to acknowledge and reverse its original sin. But whether or not the population transfer of 1948 was premeditated (as he says), or largely opportunistic (as Mr Morris says), history can hardly be rewound over half a century.

Some thoughtful Israeli politicians have indeed acknowledged their country's portion of the blame. In his 2005 memoir, “Scars of War, Wounds of Peace”, Shlomo Ben-Ami, a former foreign minister (and historian) accepted that in 1948 an Arab community “in a state of terror” was put to flight by a “ruthless” Israeli army that perpetrated atrocities and massacres. This was done consciously to enlarge the borders of the new state. But whatever the moral case for letting back the refugees, Mr Ben-Ami says, after the war this was “out of the question in a historical and political context”, not least because of the illegitimate demands of the Arab states, who never accepted partition and indeed grabbed for themselves much of what should have been the Palestinian state.

As Ehud Barak's foreign minister, Mr Ben-Ami was part of the team that tried at Camp David in 2000 to make peace on roughly the border of 1967. Mr Pappe is not surprised that this failed. For the Palestinians, he says, “1948 is the heart of the matter and only addressing the wrongs perpetrated then can bring us closer to the end of the conflict.” But Mr Pappe wants Israel not just to apologise but also to let back all the Arab refugees, and so give up the idea of remaining a Jewish state with a Jewish majority. It is hard to imagine many Israelis agreeing to that, whatever they come to believe really happened in 1948.

The Ethnic Cleansing of Palestine.
By Ilan Pappe.
Oneworld; 313 pages; &pound;16.99. To be published in America by Oneworld in December 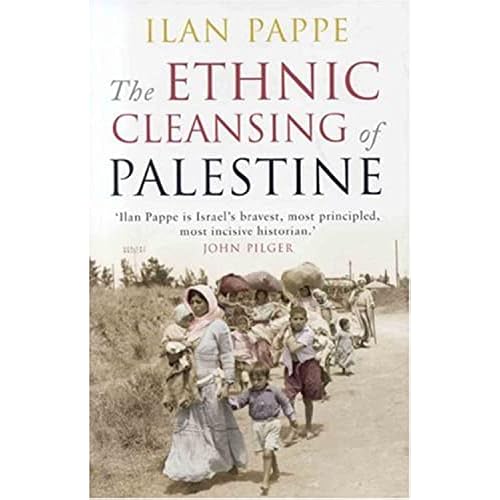 Lupetate i jedan i drugi.