Racial, ethnic and religious prejudice may lie in our evolutionary past, according to new research using monkeys. Several experiments have found the animals were more wary of outsiders and associated bad things with them. The research was conducted on the uninhabited Puerto Rico island of Cayo Santiago, which has a large rhesus monkey population. 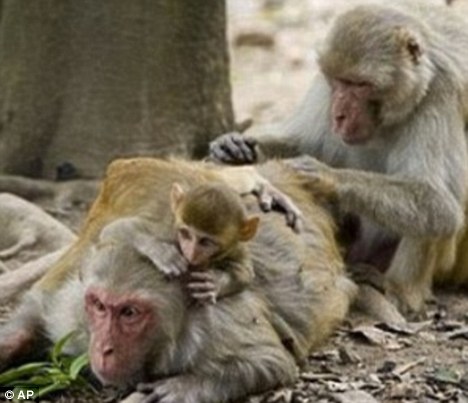 Family: The monkey on the island of Cayo Santiago are wary of outsiders

Yale student Neha Mahajan led a team of psychologists to study their behaviour because like humans, monkeys live in groups and have strong social bonds. Psychologists have always known many of our prejudices operate automatically, without us even being aware of them. Tests on the monkeys showed that our tendency to see the world in terms of 'us' and 'them' has ancient origins...
http://www.dailymail.co.uk/sciencetech/ ... NKEYS.html

....
Nazad na matematiku i probabilnost evolucije. Zaista nemam vremena da vam ja ovo pricam, pa cu iskoriti pravo na slobodu izrazavanja i prenijeti ovaj tekst u cijelosti (ko hoce neka procita, ko nece nemora, i neka nastavi da vjeruje u NINove prepiske iz evolucionistickih kjniga upakovane kao njegove rijeci).
.....
Joseph Mastropaolo, Ph.D
Evolucija je bioloski nemoguca
Charles Darwin was daydreaming when he wrote that he could visualize “in some warm
little pond,” with all sorts of salts and electricity, the spontaneous generation of the first living
cell.2 Darwin’s dream of the magical powers of salts and electricity may have come from his
grandfather. Mary Shelley in her introduction to Frankenstein reveals, “They talked of the
experiments of Dr. Darwin . . . who preserved a piece of vermicelli in a glass case, till by some
extraordinary means it began to move with voluntary motion.” She goes on to speculate that
galvanism (electricity) was the extraordinary means.9 All theories need testing so I bought some
vermicelli pasta, kept it in salt water in a test tube for a month and never saw any motion,
voluntary or otherwise. I also used a tesla coil to conduct “galvanism” through it to a fluorescent
bulb. The bulb lit and the vermicelli eventually began to cook, but never came to life.

“ Darwin’s bulldog,” Thomas Huxley, had a vision of himself on the early Earth as “a
witness of the evolution of living protoplasm from non-living matter.”6 In Huxley’s day, the cell
was blissfully considered simply a blob of protoplasm. Huxley also may have read Mary
Shelley’s subtitle to Frankenstein, “The Modern Prometheus.”9 Prometheus was the Greek
mythical Titan, who formed a man of clay then animated it. This myth may be the earliest
reference to abiogenesis, the animation of inorganic materials. In order not to leave that
possibility untried, I fashioned a clay man and directed the tesla coil spark over it to light the
bulb. The clay man was not animated.

Evolutionists currently invoke the “primeval soup” to expand the “warm little pond” into
a larger venue, the oceans. They aim to spontaneously generate the first cell so they must
thicken the salt water with (take a breath) polysaccharides, lipids, amino acids, alpha helixes,
polypeptide chains, assembled quaternary protein subunits and nucleotides, all poised to selfcombine
into functional cellular structures, energy systems, long-chain proteins and nucleic
acids.1 Then during an electrical storm, just the right mix of DNA, mRNA, ribosomes, cell
membranes and enzymes are envisioned in the right place at the right time and the first cell is
thunderbolted together and springs to life.5 That marvelous first cell, the story goes, filled the
oceans with progeny competing in incredible polysaccharide, lipid, amino acid, nucleotide and
cannibalistic feasts. The predators thereby thinned the soup to the watery oceans we have today
while the prey escaped by mystically transmuting themselves into the current complex animals
and plants, or perhaps vice versa because no one was there to record it. We are assured by the
disciples of Darwin and Huxley that the “once upon a pond” story to obtain a blob of
protoplasm is still sufficient for the spontaneous generation of the cell as we know it today. All
demur when asked for evidence. All balk when asked to reverse-engineer a cell in the laboratory
in spite of the fact that laboratories rival nature and reverse engineering is orders of magnitude
easier than engineering an original design. One wonders why they balk if cell stuff is so easily
self-generated and carbon molecules seem to have such an innate tendency to self-combine.

To test simply the alleged self-combining tendency of carbon, I placed one microliter of
India (lampblack) ink in 27 ml of distilled water. The ink streaked for the bottom of the test tube
where it formed a dark haze which completely diffused to an even shade of gray in 14 hours. The
carbon stayed diffused, not aggregated as when dropped on paper. At this simple level there is
no evidence that the “primeval soup” is anything but fanciful imagination.
In science, the burden of evidence is on the proposer of the theory. So although the
evolutionists have the burden of providing evidence for their fanciful tales, they take no
responsibility for a detailed account or for any evidence demonstrating feasibility. Contrarily,
they go so far as to imply that anyone holding them to the normal requirements of science is
feebleminded, deranged or evil. For example, Professor Richard Dawkins has been quoted as
saying, “It is absolutely safe to say that, if you meet somebody who claims not to believe in
evolution, that person is ignorant, stupid or insane (or wicked, but I'd rather not consider that).”7
Instead of taking proper responsibility for the burden of evidence, the evolutionist propagandizes
by the intimidation of name calling. (Kao sto je vec dokazao moj primjer na ovoj temi)

To set a better example, let us take up the evolutionist’s burden of evidence to see where
it leads. Our first observation is that apparently all functions in a living organism are based
largely upon the structures of its proteins. The trail of the first cell therefore leads us to the
microbiological geometry of amino acids and a search for the probability of creating a protein by
mindless chance as specified by evolution. Hubert Yockey published a monograph on the
microbiology, information theory and mathematics necessary to accomplish that feat.
Accordingly, the probability of evolving one molecule of iso-1-cytochrome c, a small protein
common in plants and animals, is an astounding one chance in 2.3 times ten billion vigintillion.
The magnitude of this impossibility may be appreciated by realizing that ten billion vigintillion
has 75 zeros. Or to put it in evolutionary terms, if a random mutation is provided every second
from the alleged birth of the universe, then to date that protein molecule would be only 43% of
the way to completion. Yockey concluded, “The origin of life by chance in a primeval soup is
impossible in probability in the same way that a perpetual motion machine is impossible in
probability.”10

Richard Dawkins agreed with Yockey by stating, “Suppose we want to suggest, for
instance, that life began when both DNA and its protein-based replication machinery
spontaneously chanced to come into existence. We can allow ourselves the luxury of such an
extravagant theory, provided that the odds against this coincidence occurring on a planet do not
exceed 100 billion billion to one.”3 The 100 billion billion is 1020. So Dawkins’ own criterion for
impossible in probability, one chance in more than 1020, has been exceeded by 50 orders of
magnitude for only one molecule of one small protein.

Now that Professor Dawkins has joined
the ranks of non-believers in evolution, politesse forbids inquiring whether he considers himself
“ ignorant, stupid, insane or wicked.”

Let us proceed to criteria more stringent. For example, Borel stated that phenomena with
very small probabilities do not occur. He settled arbitrarily on the probability of one chance in
1050 as that small probability. Again according to this more stringent criterion, we see that
evolving one molecule of one protein would not occur by a wide margin, this time 25 orders of
magnitude.4

Let us go further. According to Dembski, Borel did not adequately distinguish those
highly improbable events properly attributed to chance from those properly attributed to
something else and Borel did not clarify what concrete numerical values correspond to small
probabilities. So Dembski repaired those deficiencies and formulated a criterion so stringent that
it jolts the mind. He estimated 1080 elementary particles in the universe and asked how many
times per second an event could occur. He found 1045. He then calculated the number of
seconds from the beginning of the universe to the present and for good measure multiplied by one
billion for 1025 seconds in all. He thereby obtained 1080 x 1045 x 1025 = 10150 for his Law of
Small Probability.

I have not been able to find a criterion more stringent than Dembski’s one chance in 10150.
Anything as rare as that probability had absolutely no possibility of happening by chance at any
time by any conceivable specifying agent by any conceivable process throughout all of cosmic
history. And if the specified event is not a regularity, as the origin of life is not, and if it is not
chance, as Dembski’s criterion and Yockey’s probability may prove it is not, then it must have
happened by design, the only remaining possibility.

Now to return to the probability of evolving one molecule of one protein as one chance in
1075, we see that it does not satisfy Dembski’s criterion of one chance in 10150. The
simultaneous availability of two molecules of one protein may satisfy the criterion, but they
would be far from the necessary complement to create a living cell. For a minimal cell, 60,000
proteins of 100 different configurations would be needed.5,8 If these raw materials could be
evolved at the same time, and if they were not more complex on average to evolve than the iso-1-
cytochrome c molecule, and if these proteins were stacked at the cell’s construction site, then we
may make a gross underestimation of what the chances would be to evolve that first cell. That
probability is one chance in more than 104,478,296, a number that numbs the mind because it has
4,478,296 zeros. If we consider one chance in 10150 as the standard for impossible, then the
evolution of the first cell is more than 104,478,146 times more impossible in probability than that
standard.

Reproduction may be called a regularity because billions of people have witnessed billions
of new individuals arising that way, and in no other way, for thousands of years. The origin of
life was a unique event and certainly not a regularity. Therefore, according to the mathematical
logicians, the only possibilities left are that life either was generated by chance or by deliberate
design. The standard for impossible eliminated evolution so the only remaining possibility is that
life was designed into existence. The probability of the correctness of this conclusion is the
inverse of the probability that eliminated evolution, that is, 104,478,296 chances to one.
Although the certainty of design has been demonstrated beyond doubt, science cannot
identify the designer. Given a designer with the intelligence to construct a cell and all life forms,
it is not logical that he would construct only one cell and leave the rest to chance. The only
logical possibility is that the designer would design and build the entire structure, the entire
biosphere, to specified perfection. That seems to be as far as science can go.
Life was designed. It did not evolve. The certainty of these conclusions is 104,478,296 (1
followed by 4,478,296 zeros) to one. This evidence suggests a Designer who designed and built
the entire biosphere and, for it to function, the entire universe. Primary and secondary sources
from history properly provide additional information on the Designer because the biological
sciences are not equal to that task .

Return to “Nauka i edukacija”